The Leinster Senior Cup was one of the big days out in the Leinster season. The cup exists in a very different format now but in yesteryears, it was a closed date, on the Saturday of the August Bank holiday.

The closed date meant that it was a well supported day and not just by the competing clubs. Thirty years ago, a long distant past to many, YMCA took on Clontarf in a high scoring game in Phoenix.

It was the third time the teams had met in recent years with bruising defeats for Clontarf in 87 and 89. It would be nice if memories came like a movie, a feature length version that we could play at will, at a time of our choosing.

More often they come as a series of snapshots, a long lost roll of film. Out of order and many out of focus but each one a part of the story. Cup Final 1992 is one of those rolls of film.

A dusty collection of memories when pieced together tell a story of a Cup win, long sought after by a club in thrall to the Cup but which had not been won since 1969.

Killester, Stella is picking up Peter Prendergast and Alan McClean as well as myself. Mighty usually drives but he doesn't want to be left with a car in the Phoenix Park if things go well. There is no chatter in the car. Neither Madness nor The Fine Young Cannibals elicit a response from a car usually noisy and full of laughs. The tension is high.

We arrive at Phoenix C.C., whose members are busy finalising arrangements for the day. There is a little stand set up on the Civil Service side, the ground looks terrific. We are gathered in the away changing room and it's clear that the tension is affecting everyone in the side. Outside, YM begin a raucous game of tip rugby. A Phoenix member arrives with match day programmes and quickly we realise Prendergast has stitched us all up in composing our player profiles. The tension lifts just a little. 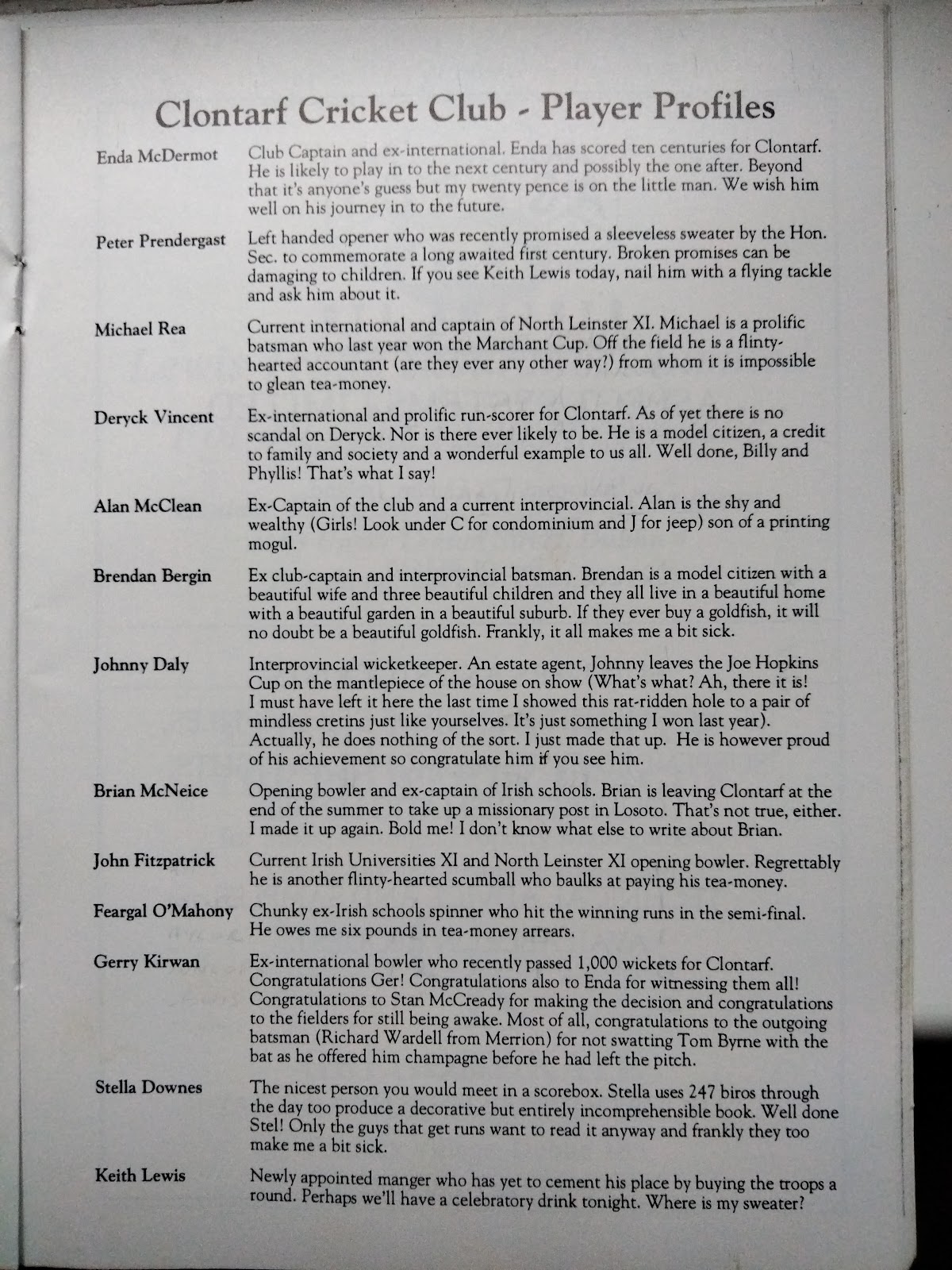 We warm up early, as today the President is coming. That is Mary Robinson, President of Ireland and the closest resident to the cricket ground, not the LCU President by the way. It is a lovely touch and adds to the already great occasion. 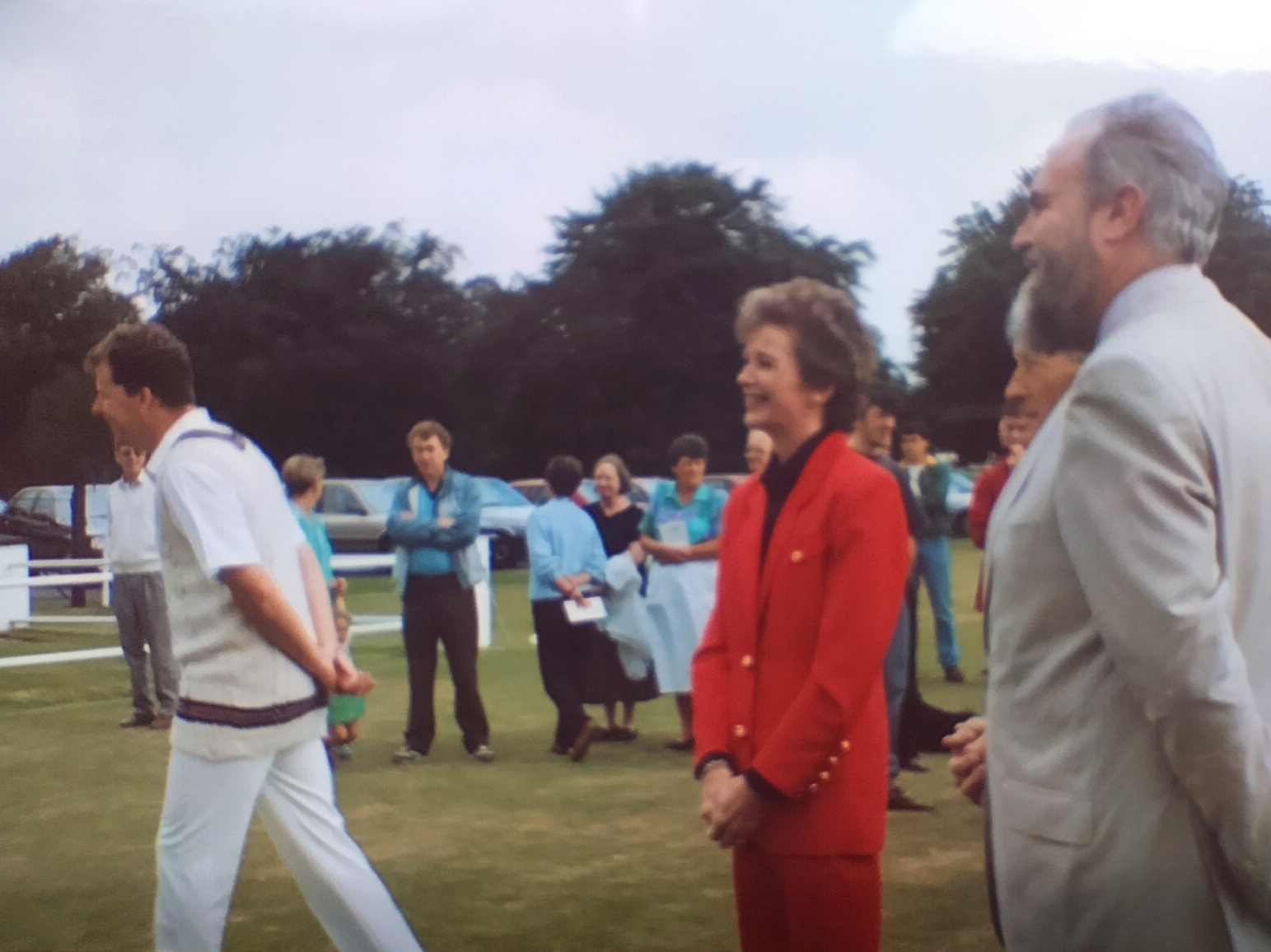 The press are here, RTE TV for the President and RTE Radio, who will provide hourly scores, are here. There are team photos with the President. She brings us luck at the toss which Enda wins. We will be batting.

It's a tough start. Peter and Michael Rea open and Colin Haine and Neil Bailey are bowling well. A bit of bounce and movement gets an edge, but Michael is put down in the slips. The let off doesn't last long, as Neil gets his man. Its my turn.

It's a struggle. I can't find any rhythm, I try to knuckle down, concentrate, try harder, grip harder, but it's getting worse. Stats rarely lie, after 34 balls I am 3. Fortunately for us Peter is in lovely touch. Right on his game, despite a lack of sleep caused by his fretting. He will make 51 before being out. 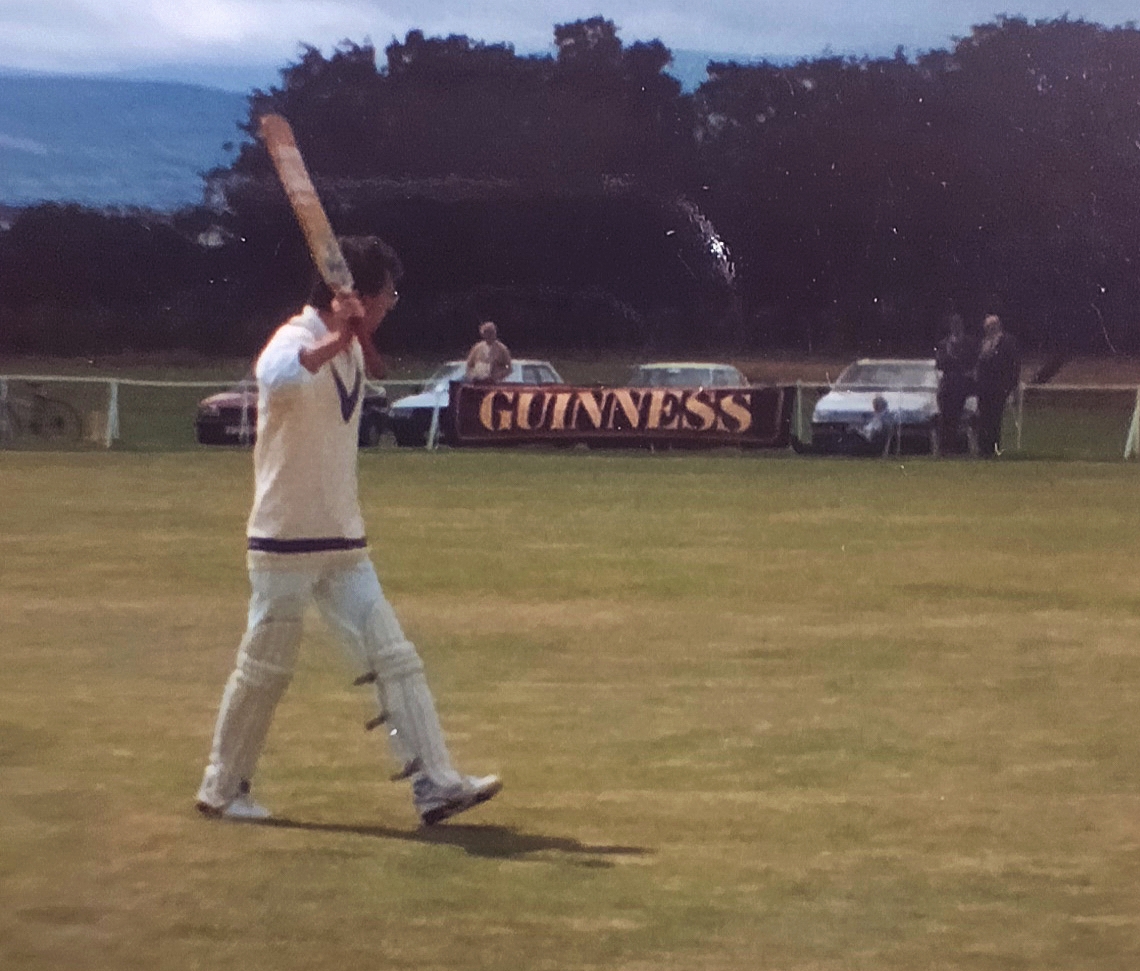 A rain shower and we are off. I sit in the pavilion, on my own, trying to get my head straight but I'm worried. This isn't how it was supposed to be, not how I imagined my day.

Back in the middle, the problems continue. I have a huge mow at a ball, miss it by miles as it hits me on the pad. At the end of my tether, I tell Pete I've had enough. I'm going to straighten my back and give it a whack. Anything is better than this. Happily Stu Taylor bowls to me and it's full, I hit it back over his head for 4. A switch is flicked. 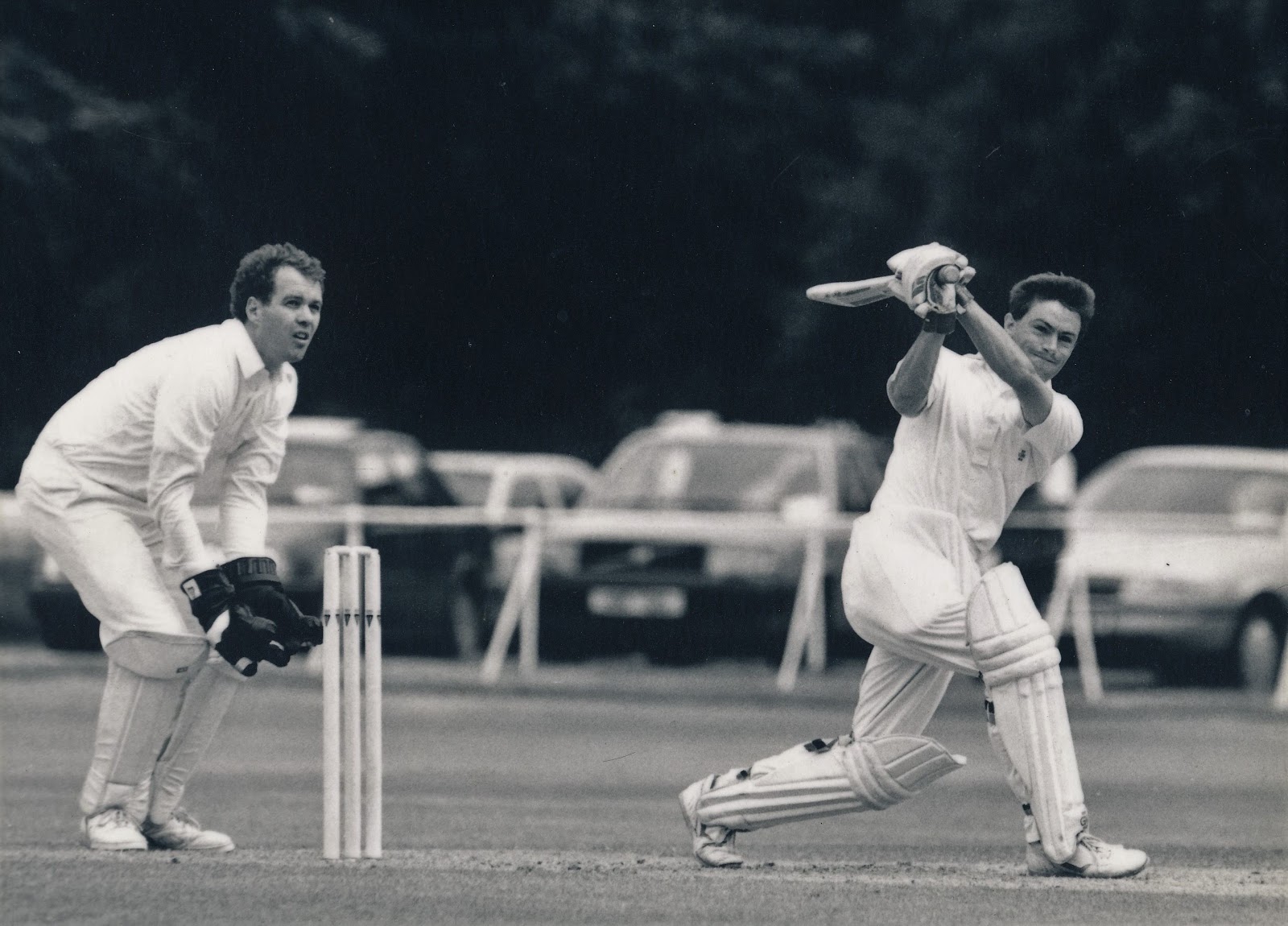 Out of focus memories of a sweep for 6, a surprise to me as I rarely sweep and 6s are even rarer . A late cut down towards the Zoo. But the unconscious mind is taking over, it's all happening, out of my control, all a blur. 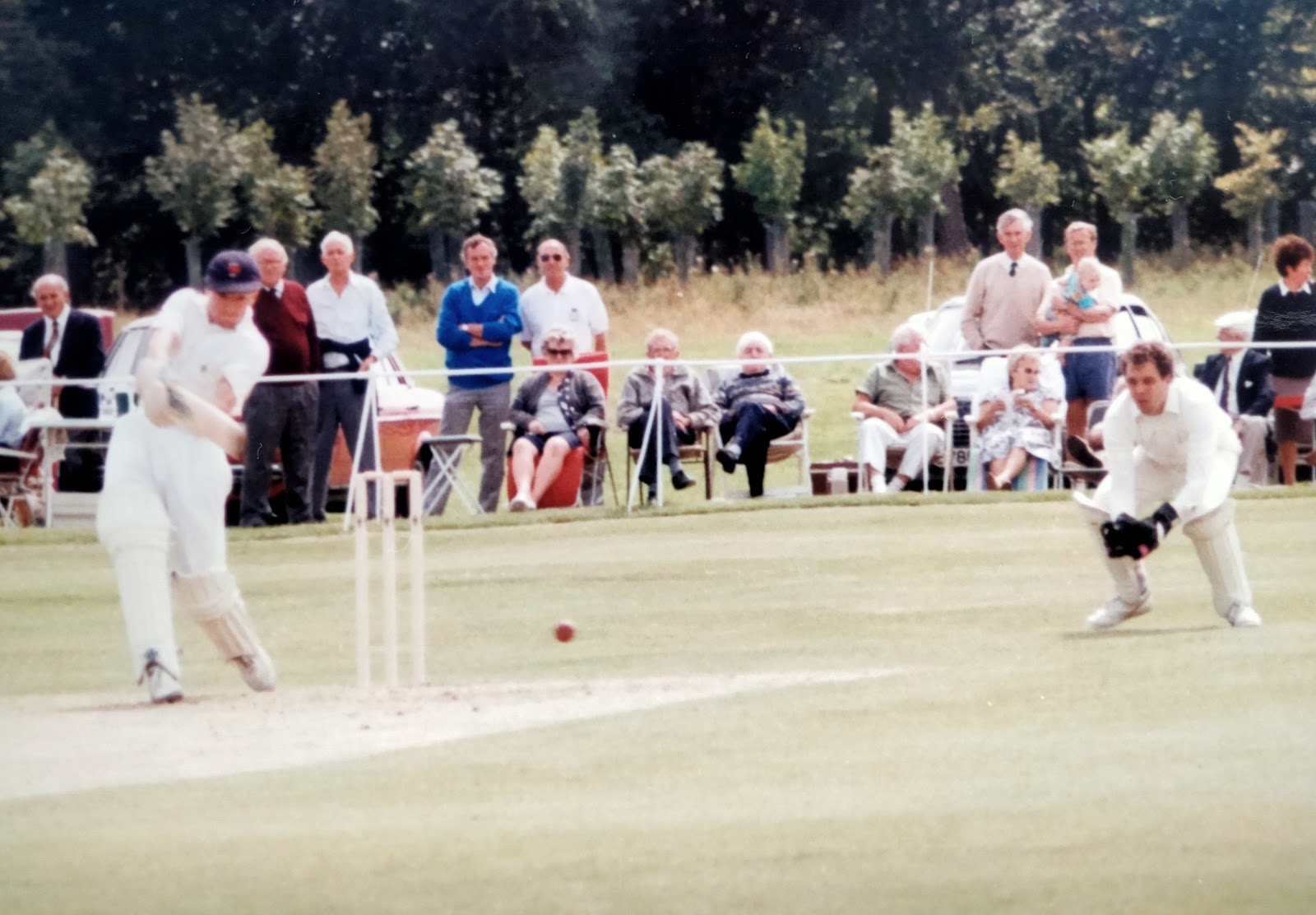 I decide that I am going to hit this ball as hard as I can, just as it arrives. Not because I need to, the outfield is fast and boundaries short. If you want to attack YM, then you attack Lewi. Lewi is the bowler. I hit it harder than I ever have hit a ball, it goes for 4. It is meant to be a statement, we mean business. 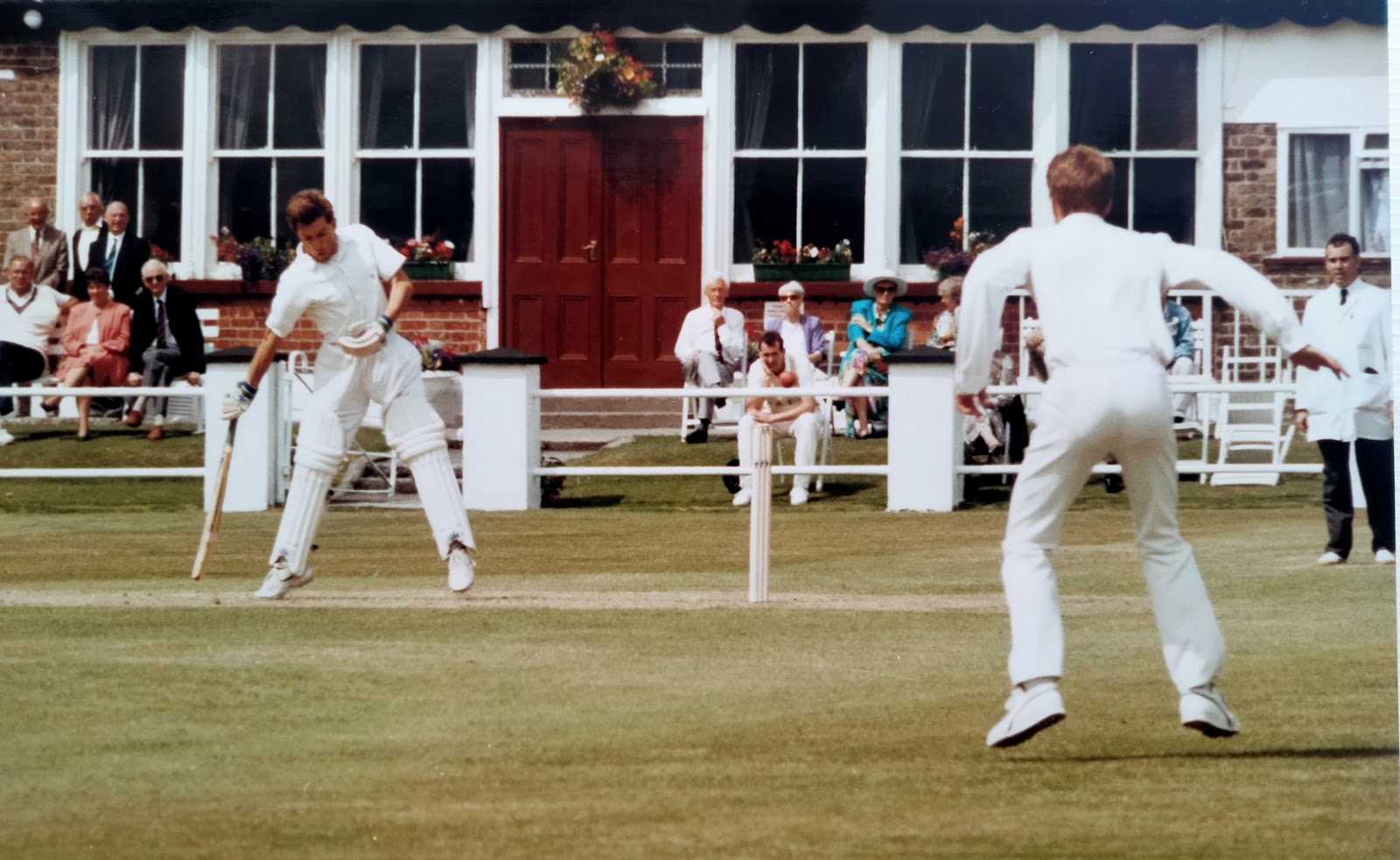 Colin Haine from the bottom end, the ball bounces, brushes my glove and bounces 2 yards in front of keeper Wishes O'Neill. Wishes does not appeal but others do. I am furious. Liam Keegan gives it not out. Mighty arrives mid wicket and gives me a bear hug. The anger rides out, but I am not happy about it. Fuel to the fire. 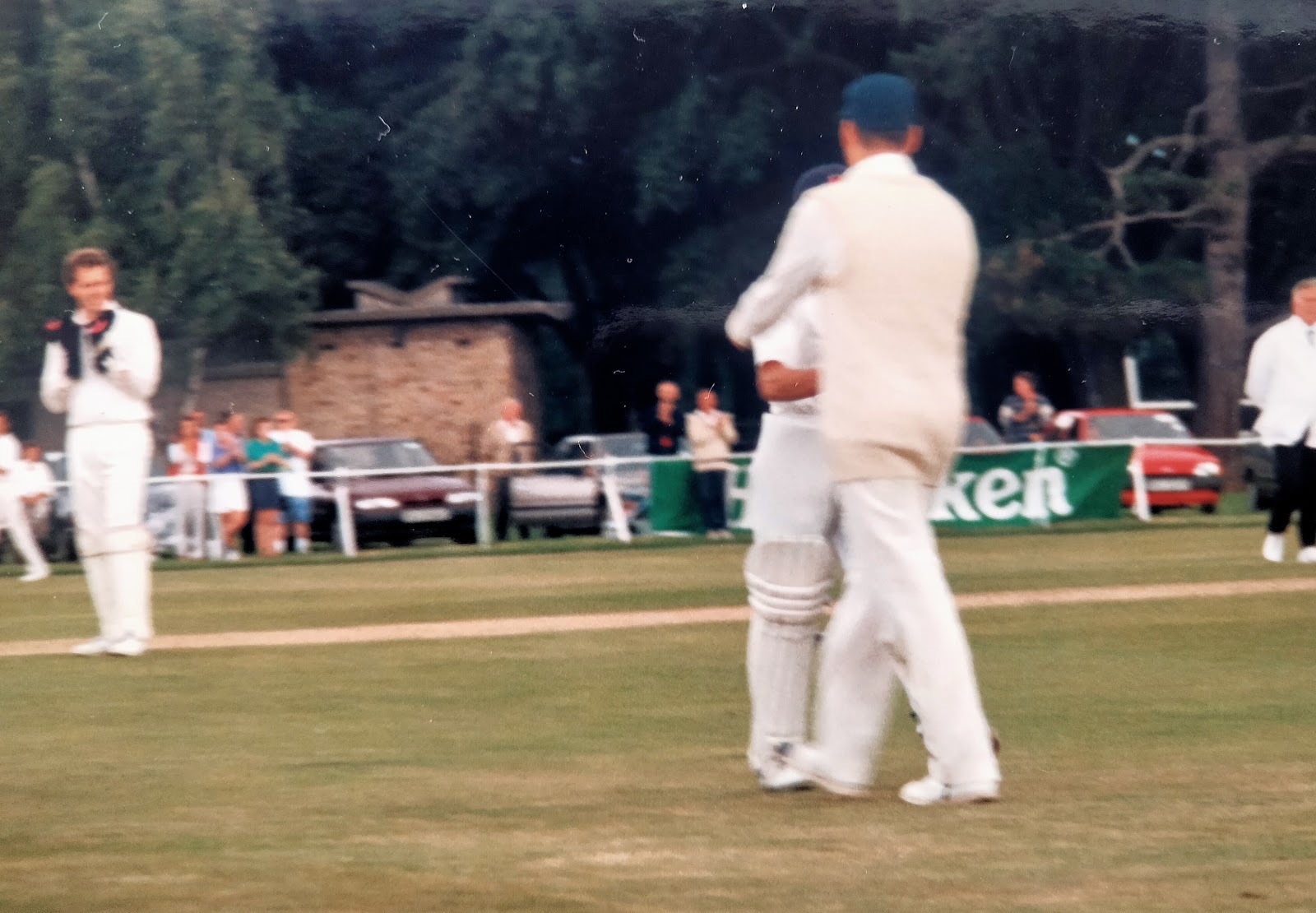 It comes to an end for me in the 55th over. Caught hitting in the air. Live by the sword, die by the sword, it is a fair equation. Suddenly I am knackered. As I trudge off, Neil Bailey approaches me to shake my hand. In a previous final, Neil had done the same thing but my distress in that moment meant that I had not seen him and walked by his offered hand. Neil is a former work colleague and an awful nice guy, this time, my manners are in place.

In the changing room, trying to keep loose, while keeping an eye on the rest of the innings. Bomber McNeice and Brenny Bergin keep the momentum going and at the end of the 60th and final over we have 338 for 6. We are happy with that. But, there is still a long way to go, it's only half time.

Enda says his piece and we are taking the field. I'm worried though. Good total or not, they are a formidable line up and I know I have 12 overs to bowl. When they look at our bowling line up, its not Bomber, Fitzer, Gerry nor Feargal that they are deciding to target. We have the minimum 5 bowlers so there is no plan B.

It's tea, they are 90 for 1, the wicket of Mark Nulty falling just before tea. One Irish batter out but 3 more to get. Gus Dunlop, Alan Lewis and Jonathan Garth are surely the key men. We are happy though, they have started well but we are content that they haven't got a flyer. Enda sprang a surprise and left arm spinner Feargal O'Mahony has opened the bowling and bowled his 12 on the trot conceding just 38 and taking MAF's wicket. 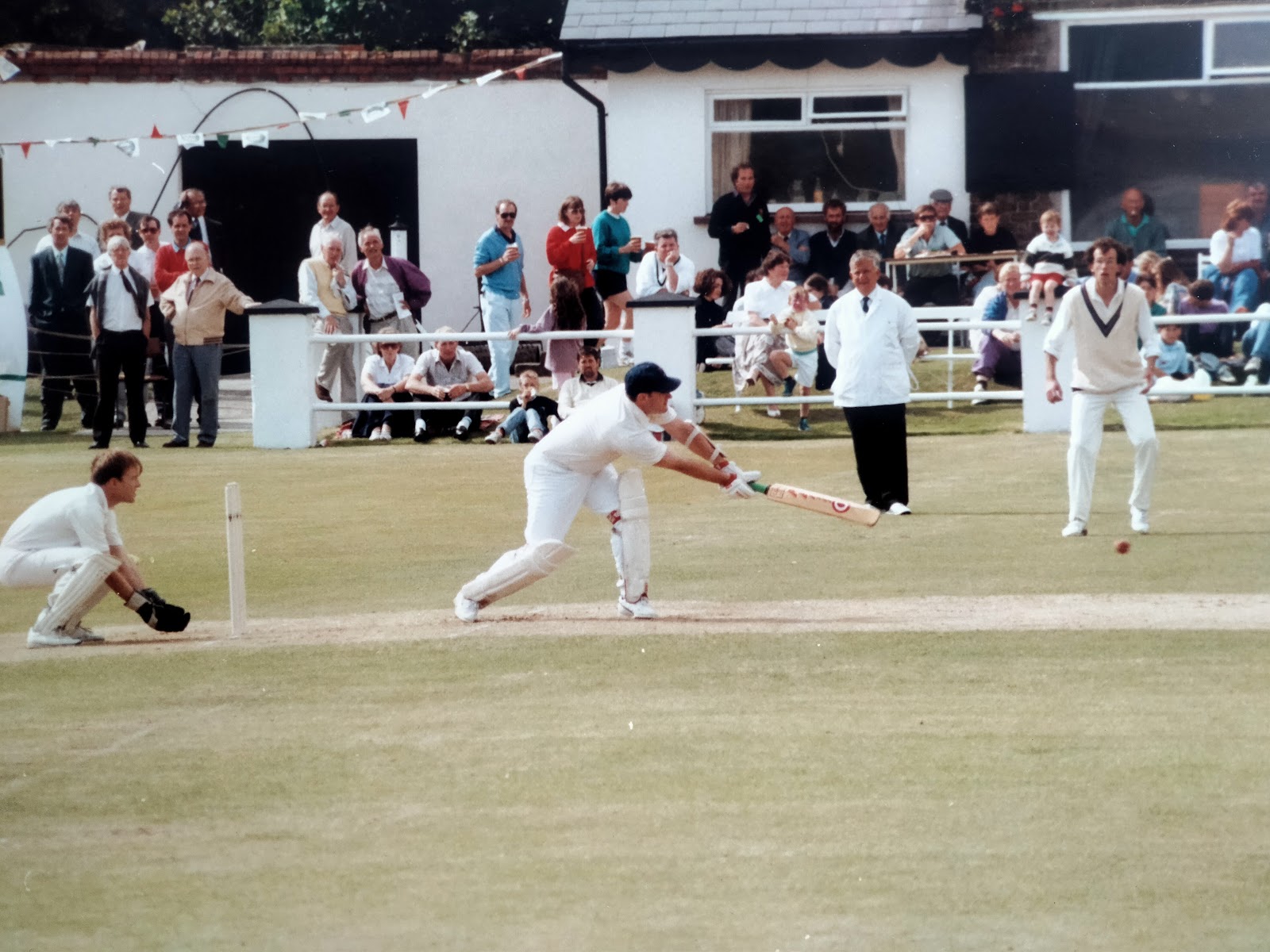 Sweeping on the off side boundary, Johnny Fitz is bowling to Lewi. Lewi slaps a full ball, aerial but very hard. I see it in slow motion, Brian McNeice, at cover, takes off, full stretch, horizontal and completes a miraculous catch. Peter O'Reilly will report in the Sunday Tribune that we "indulged in unbridled hysteria" in celebration. Arguably that is an understatement. It is the finest catch that I have ever seen live, add the occasion and the batsman and it is even better than that. Two down, it's up to Gus and Jonathan now.

Phew, managed a quick 3 overs and got out relatively unscathed. Hugely relieved. 9 more to go. Snapshot 18 No rest for the wicked, three overs later I'm back on, but from the other end this time. And a bit of luck immediately as Jonathan hits to Michael Rea's safe hands. Boom.

I'm not sure how this is happening but another wicket comes my way, when Colin Haine nicks one to Johnny Daly. But Gus is still there and passes 100 with a single. A couple of balls later though he decides it is time to hit me into the lion enclosure. It's a mishit, Reaso is at Long Off, I turn away, I can't watch this, I say a little prayer and close my eyes. My teammates' cheers tell me Michael has taken the catch. Gus is gone. Now we just need to manage the game and Enda was born to do just that.

Enda has done the business, efficiently closing off the game and though there is a flurry of runs from Martin Ridgeway in Fitzer's final over, which brings up Martin's 50, we have known for the last 10 overs that the game is ours. We walk off, greeted by our delighted club President,Tom Byrne, the victors by 44 runs. Somehow I have managed to get 5 wickets, the offending batsmen should be ashamed of themselves. There is still a big crowd present at the close.

When Enda collects the cup, the delight and relief is written all over his face. He is so happy, for once he seems lost for words. Don't worry, he'll make up for it later. 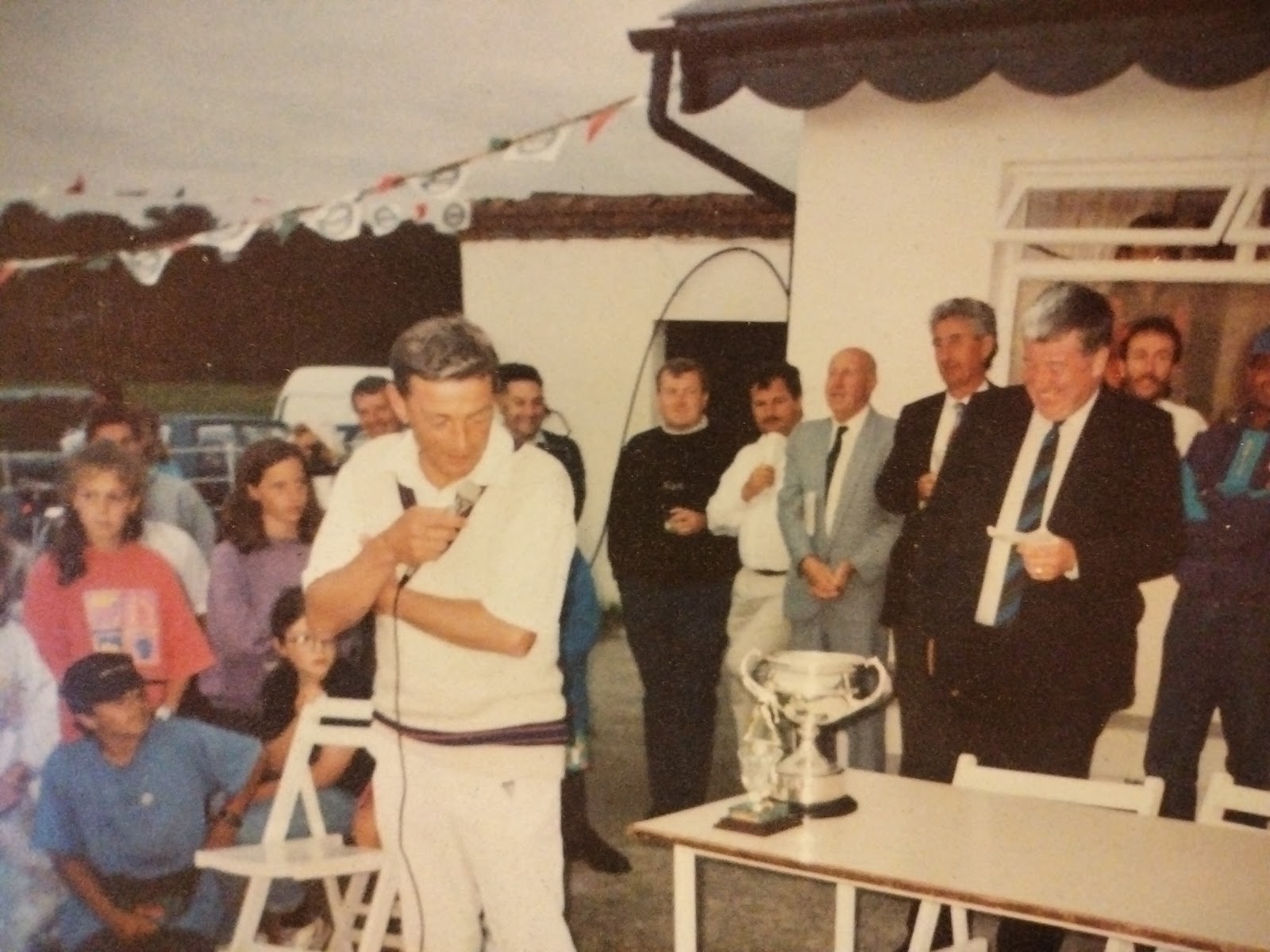 Amongst the milling crowd I find my Dad. Dad has Parkinson's disease and he is at the start of a short and severe Alzheimer's journey. But he is a very quiet man most of the time. Today it's emotion that keeps him silent, he takes my hand and shakes it, no words necessary even if they were possible. Standing 5 yards behind him, my Mum beams, tears in her eyes, for once in her life quiet.

It's a lovely evening in the Phoenix Park, people have stayed, inside and outside are crowds of people. I need some quiet, so sneak into our changing room. There I find Gerry Kirwan, feet up, cigarette in hand. Happy. We sit there for 20 minutes or so in silence, taking it all in. 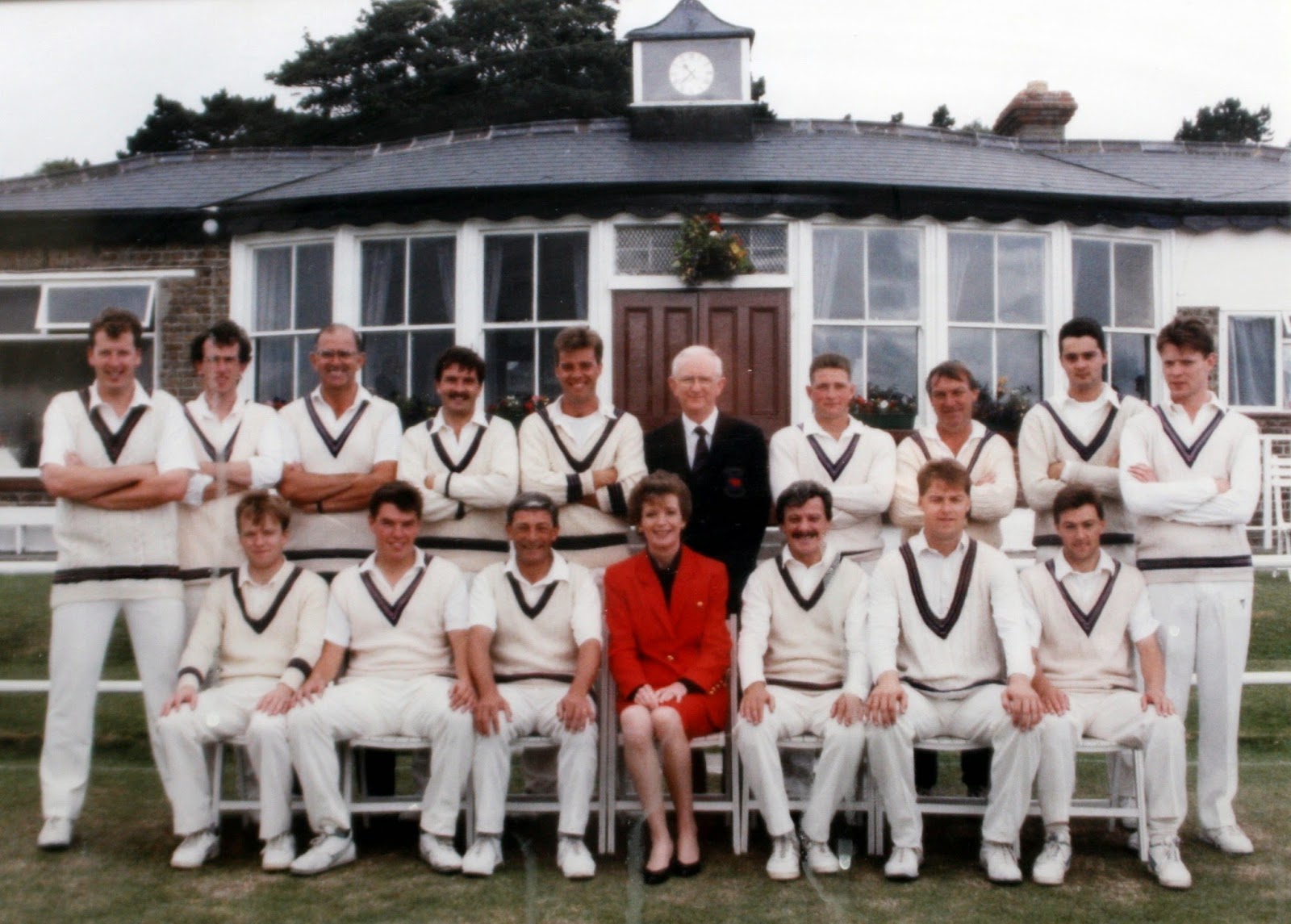 Being a Bank HoIiday weekend, we have a game on Monday. No prizes for guessing who the opposition are, we usually play YM on the August Bank Holiday Monday. We beat them again, this time by 10 wickets. Gus gets another 100 but Michael and Pete put on 170 to chase down their total.

It's just a roll of 24, I wish it had been a roll of 36 or maybe even 2 rolls, but it's nice to look back at those images, both physical and mental, remembering a game that started a great run of Cup success for the club.

Soon after the game, Peter Lacy, a stalwart of Clontarf, gifted me a photo album of pictures that he took on the day; it remains a prized possession. Some photos were taken by Fiona Manning who was on camera duty that day, not that she remembers taking them.

There are also some assorted press photos included, one of which was given to me by Roly Burke who was married to the late Wishes O'Neill. After Wishes untimely death, Roly passed the image onto me, for which I am very thankful.